We all know that birdwatching very much is about moments. Mostly great moments and a few frustrating ones…hehe! -After a couple hours waiting on the viewpoint there he is, the Great Philippine Eagle appears above the forest! ~Long sweaty hours on a forest trail for nothing more than a frustrating glimpse of a Banded Pitta.~ Suddenly, after quite a while and out of nothing, this male Swinhoe’s Pheasant walks up on the roadside bank and starts posing for a full 5 minutes! ~A long rough day out on the ocean, but this Waved Albatross just never sailed by.~ Long hours of travel by plane and car, but here they are, superb graceful White-naped and Siberian Cranes!-

It’s all about be in the right place at the right time and when you finally get those great moments to happen, better hold it and enjoy! I want to tell you about such a moment I deeply enjoyed…a very special tiny bit of time that lasted for 2 hours! “The count from Chiang Dao canopy tower!”

The area in and around the grounds of Wat Thum Phaprong or better known as Chiang Dao temple is well known amongst birders. Not for nothing, it’s a great area to go birdwatching with quite a few specialities on offer in pleasant surroundings. However, few of us, inclusive myself until recently, would have imagined the place to be good for a record!

Great moments happen when you least expect them. On 22 November 2009, Bob East, Bill Glanz and myself were scheduled to bird Doi Ang Khan, where we experienced thick fog, so after a couple hours and having seen some of the easier targets of the area, we decided to leave the place and fog in search of something better at a lower elevation.

We had visited the Chiang Dao area earlier in the trip, but still, with the higher elevations fogged up for the day and not much else to go for, the temple site seemed a good idea…right! We made it quick up the steps and reached by 14h45, the few square meters where we were about to spend the next 2 hours. A superb 360 degrees view of the surrounding forested hills and valley was ours here up the canopy tower…canopy tower you said?? Oh well, Thailand doesn’t have anything that looks like a proper canopy tower, here at Chiang Dao, the little platform on top of Wat Thum Phaprong is as close as it gets. The views and birds are superb anyway. 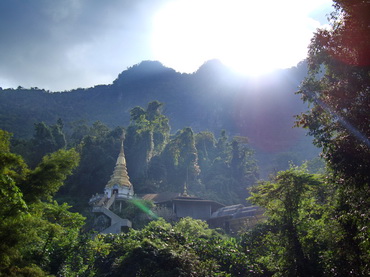 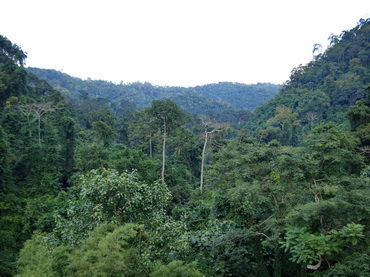 Chiang Dao Temple and surrounding forest.View down the valley from the temple platform.


So, what is this all about? Well, we did a great job to record 52 species in just 2 hours, a 2 hour sit where we never left the little space up the temple platform, a forest-only site in SE-Asia, yes in the afternoon! Must be a record. I reckon 25 to 30 species would be a good average afternoon at the site. The overall experience we had this time was one of a feeding flock that surrounded us but never moved on. While this area usually holds high bird activity in the early morning, afternoons generally are much more quiet. Heavy cloud cover and bad weather higher up the mountain must have kept bird activity up all day so we could enjoy this very special moment.

Please check the bird list below to see which 52 species made it in 2 hours. That we didn’t exhaust the area within that time is clear, after we closed the 120 min. count, some more bird species appeared, most notable a Blue Rock Thrush seen from the viewpoint and Streaked Wren Babbler on the way out. If I may highlight a couple birds we saw during our count, it must be the Blue-bearded Bee-eater that kept hanging around below the viewpoint, the Bay Woodpecker that showed exceptionally well and both scarce Asian Emerald Cuckoo and Purple-naped Sunbird are always welcome additions.

Now only rest me to warmly thank Bob and Bill for the enjoyable birding we had together in the mountains of northern Thailand. 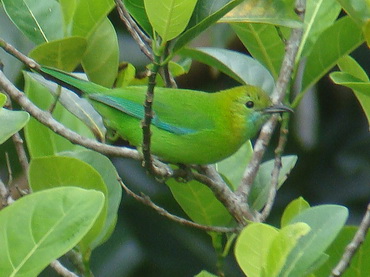 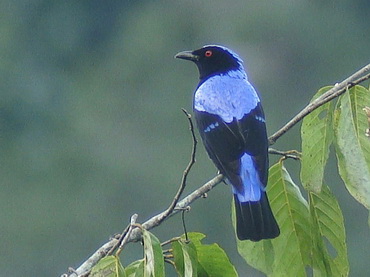 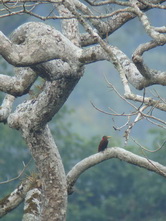 It's a Bay Woodpecker! 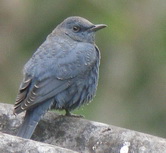 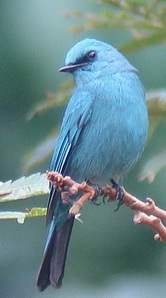 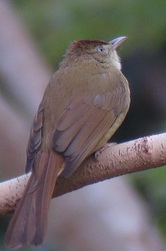 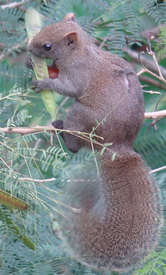 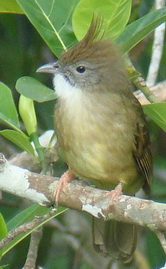 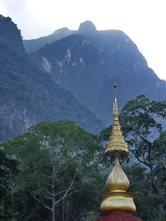 The temple with Chiang Dao
mountain beyond.