A follow up on our Nov. '13 article about the destruction nature
and birds experienced due to Typhoon Haiyan.

It would be hard to choose any better moment to write this little report of a morning’s visit to Lake Danao near Ormoc city on the island of Leyte, Philippines. I’ve got my computer on the table by our window and my eyes go back and forth between the screen and the outside world where typhoon Glenda (international name Rammasun) is battering Biliran island today, 15 July 2014.

-The Pacific Swallow seems to be the toughest bird around here in stormy conditions
and 1 was actually still flying around in driving rain and strong gusts of wind.-

I’m working on battery power as the electricity went out earlier today, just as the phone signal. We are just 80 km north of Lake Danao which we had visited last Sunday, only 2 days ago. It’s been exactly 8 months after the big Typhoon Yolanda (Haiyan) ravaged large parts of Leyte, Samar, Biliran, north Cebu… I’ve had the luck of having visited the lush forests around Lake Danao on 7 occasions before Typhoon Yolanda struck. Last Sunday 13 July was the first time I visited after the event. -I knew already nature in the area would not look very healthy.- My rescue mission that had brought me to Leyte and Biliran last November, just after the big typhoon, had enabled me to get a good idea of what had happened to the forests in the mountains. At the time I could only watch from a distance but it was all clear to me. As you may have noticed I did an article at the time with the title "Typhoon Haiyan left parts of the Philippines behind as a wintery landscape typically found in temperate climates only!" I’m keen to post photos of what is left of the forests now; or in other words show how an area with pre-typhoon virgin forest looks like after 8 months of recovery time. 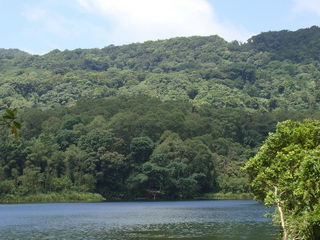 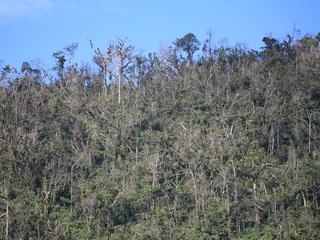 Dense forests bordered Lake Danao before Nov.'13Zoomed in on a ridge clearly shows what little is left today.


My previous ‘Typhoon’ article was certainly regarded as interesting by many readers however I have a feel it was only met with disbelief by the ‘officials’. As an example I can mention Birdlife international who I did sent an email to notice them of my article and what had happened to the odd 100s (1000s??) square kilometers of primary forests. The email was never replied to and the events never made the news on the Birdlife website. I mean, I can’t really blame them for focusing on posting more positive news. The Philippine branch of Birdlife had an article going where from a rather scientific view (text not easily read by the public) was posted that native trees are typhoon resistant whether introduced tree species are not. I’d like to note this may well be true for less powerful typhoons and to recommend to people planting native trees certainly looks good.
Unfortunately it may now be time to recognize that typhoon Yolanda completely destroyed big areas of perfectly good primary forest. Lake Danao is an easy accessible site and the area around the lake has seen some encroachment and small plots being cleared for agriculture. However the area holds protected status and most of the forest around the lake was intact and natural up to 8 November 2013… Now there is no canopy left and apart from some spots sheltered in gullies there isn’t anything left that I think would be worth calling second growth forest. The area mostly looks like a million dead stumps and sticks with some scrubs at the bottom. Not really what I would love tropical forest may look like. Actually, it’s just hard to describe it and even photos taken of the area hardly show the real situation properly. There are some bigger trees still standing alive only they haven’t got many branches left, but they may recover. The forest may recover, however for it to return to its previous quality will take a very long time. New trees won’t grow nice and old and get covered with lichen and moss in only 10 or 20 years. With climate change delivering more frequent and especially stronger typhoons it may be unlikely we’ll actually ever be granted enough years recovery time… let alone the unabated population growth in the Philippines putting ever more pressure on the few remaining forests. It all may look a little hopeless. 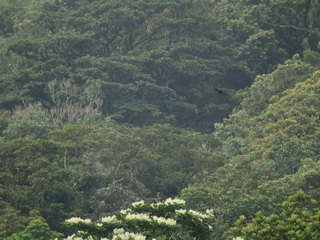 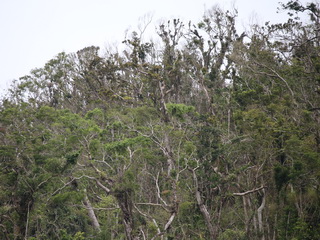 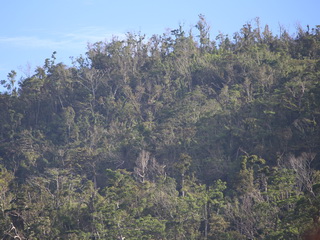 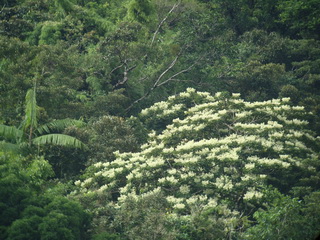 Easy birding with birds showing in open conditions.Tough birding and hard to find anything in a wall of green.


Anyway, enough said above and the good news is there are some birds left (clinging on?) around Lake Danao so let’s go to my sightings of last Sunday. I even got 2 species that had eluded me on each of my 7 previous visits. I must admit that birding in the open conditions rather than extremely dense forest was quite easy so it doesn’t surprise me too much I found a couple new ones for my site list. A Naked-faced Spiderhunter showed nicely on top of a dead tree at a spot where it was previously impossible to see the sky overhead because of the closed canopy. Also a Pinsker’s Hawk Eagle was my first sighting for the area. It was a juvenile I could not possibly have overlooked when it was showing its mostly white body high up in a left over forest giant that barely featured any cover from smaller branches and leaves. I was surprised to still find Philippine Trogon as they do require good forest. I found a nice male in a little gully that was still a bit greener than the surroundings however the Trogon used perches no higher than 2 meters off ground which in normal condition forest would be unusual. This bird however had no choice as there was no or little cover higher up than the low scrubs. The opportunity was well used for a photo. I heard Yellow-breasted Tailorbird and Streaked Ground-Babbler in some familiar spots. Those are ground dwelling species and I’m sure they aren’t affected too much although certainly the Babbler would love some decent canopy overhead. It was good to note the area still had a few Flowerpeckers although not nearly in numbers it used to be. I found 1 male Bicolored Flowerpecker and a few Orange-bellied Flowerpeckers, the latter previously very common in the area. Any bird species dependent on forest fruits must have suffered greatly as there may have not been any berries available for a long time and I’m sure will still be scarce. I did not hear a single Yellow-breasted Fruit-Dove which was a common species, and I lost hope quickly of finding any Samar Hornbills. It just doesn’t look suitable for them anymore. 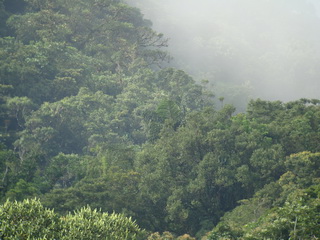 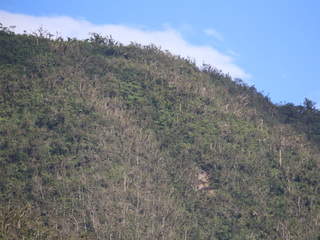 
I only spent about 3 hours on the trail so I didn’t get a long list of birds for the morning. However I believe any record in the post-typhoon habitat must be interesting and every species still found would post a little victory. Here’re my sightings apart from those mentioned previous; Everett’s White-eyes, Philippine Coucal heard, Brown Tit-Babbler, Metallic-winged Sunbird family with 2 young begging birds, Colasisi 2 flyby, Asian Palm Swift, Coleto few, Hair-crested Drongo heard, Rusty-breasted Cuckoo heard, Brown-breasted Kingfisher 2 pairs, Philippine Bulbul, Yellow-bellied Whistler heard.

Note; Typhoon Rammasun I was watching while writing this article sliced across the Philippines including Manila, killing at least 98 people and wrecking more than 110.000 homes. It later went on strengthening again on its journey towards mainland Asia where it caused for 11 casualities in Vietnam and 33 in South China. It was followed by tropical storm Matmo just a couple days later dropping enormous amounts of rain when it edged the Philippines on its way to Taiwan… A number of typhoons pass over Philippines yearly and may occur any time from June to December. There seems to be a trend that storms occurring early in the season affect mostly the north of the country (Luzon) while November and December mostly sees storms go through Visayas and Mindanao. The best time of year for birding in Philippines is outside the typhoon season in February – May. 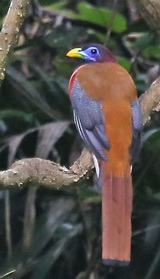 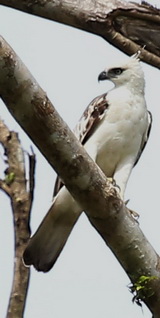 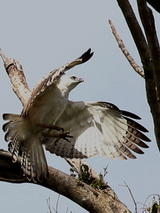 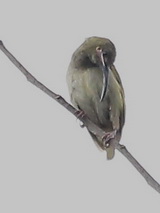