Typhoon Haiyan left parts of the Philippines behind as a wintery
landscape typically found in temperate climates only!

Typhoon Haiyan (Yolanda for Filipinos, 8 November 2013) was one mighty storm and the events had me to witness the destruction myself as I had to go on a 80 km road trip from Ormoc on Leyte to our house on Biliran island with devastation all along... I mean that does include areas with not any human habitation in sight...

Obviously, the events have been much in the news all over and I wouldn’t have a feel to write any more if it wasn’t for 1 element that seems to be missing from all reports*... The main channels, typically sensation seeking, focus on the death count and destruction in Tacloban city. Others give a more in-depth view and start reporting what may have caused the disaster; Nature? Man? Some words popping up regularly are climate change, geography, a booming population, poverty, flimsy construction and corruption preventing proper infrastructure (seawalls, storm shelters?) to be put in place.

One "smart" report in a major newspaper, mentions this (although I would at this moment not say that myself to any Filipino who has lost family members) ; "Humans played a big role in this disaster, too — probably bigger than nature's, meteorologists said. You have a very intense event hitting a very susceptible part of the world. It's that combination of nature and man," said tropical meteorology professor X". "If one of those ingredients were missing, you wouldn't have a disaster."

Now, up to before Haiyan I would have agreed, - although maybe not totally, with the report and words of professor X. Isn’t it right that people build homes in dangerous places? Barely above sea level, next to volcanoes, right on major faults seeking the most earthquake prone spots on earth, river valleys that must see flash floods sooner or later... all seem to be favourite places for humans to put up often poor construction. So, an earthquake may shatter buildings but won't put down a single tree. I witnessed the 2004 Indian Ocean Tsunami in southern Thailand and I must say it didn’t do much to nature while people were suffering. Floods are local events and the wildlife would easily move to higher ground while perhaps waterfowl may use the opportunity… people however! Etc. etc. I think you may get the idea.
If 1 word has been overused in the recent events it must be "resilient". I guess they do that to give victims hope or as a chance for Filipinos to remain proud. However, I would rather believe nature is resilient, people are not so, people die in disasters and I estimate it will take at least 10 years for a backward area like Leyte and Samar to get back to a state it had been before the big typhoon struck. Coconut farming (copra production) is a major industry on the islands and it is estimated that about 600.000 people on Leyte alone lost their livelihood completely. I’ve seen it; there is not a single tree undamaged. Most actually just toppled over or had their tops broken off. It will take 10 years before newly planted trees start to produce and the locals haven’t got a clue about changing to alternative crops.
Let me come to my point in this article now, - just up from the plantations are the forests on the mountains. (Nothing left lower down to start with.) Looking up the colour I witnessed was brown. This used to be lush green. This is an area that in the terms of "professor X" has one of the elements missing, -the human one, so for professor X there would not have been a disaster in those areas... what can I say... my goodness, typhoon Haiyan was a rare event with winds strong enough to destroy complete forests… a rare event where nature managed to destroy nature!* Not a single green leaf left on the trees. Green mountains coloured brown in an instant and left barren. Really this is unprecedented. This is going to hurt the birdlife badly. You have to see this to believe it. I may be the only birder who has been in the typhoon struck area so far if I wasn't already the only birder on Biliran-Leyte before the typhoon. I may be 1 of a few who would care to report on this and perhaps with all the human suffering this is quite easy to understand. But tropical forests with not a single green leaf left on the branches. Where have we seen this last? Vietnam war? I presume what I’m trying to say here has some significance to it and it has not been reported on by any of the regular news channels.* Is nature going to be resilient this time around??? I bet it will take a long, long time before wildlife populations may get back to what they used to be...

I’d like to refer to a recent article posted on the Birdlife website. "Scientists identify the world's most irreplaceable protected areas." Leaving “protected” in the middle I would think the Philippines with its high endemism must have quite a few of those areas. Going into detail about the areas wrecked by the typhoon we may note that, fortunately, Samar and Leyte haven’t got a great deal of endemics on their own. However with a relatively extensive forest cover as compared to some other islands, they feature as an important home to many endemic species generally rare in the country. Examples are countless and for some species the area used to be one of the main strongholds. One of the first to pop up in mind is the Rufous Hornbill. Today only the Sierra Madre on Luzon still has a relatively healthy population. Other populations of this widespread and once common endemic have been decimated by habitat loss and hunting. And we may now forget about it's stronghold on Samar… even if trees recover and grow green again in the weeks to come it will take a long time before forest fruits, -the Hornbill’s main diet, will reappear. These birds have no choice but to migrate (Which is the big question; would they do that?) or more likely, just starve. The Rufous Hornbill was listed as Near-threatened. I have ever felt this to be soft and ripe for uplisting... oh well, today it certainly is. Moreover I would say the race semigaleatus of Samar, Leyte, Bohol, Biliran and a few other places in the Visayas may today warrant "critical" status. Yes, because of the typhoon.

I would assume most Flowerpeckers, who depend on mature trees and forest fruit, may have to face a bleak immediate future in the typhoon zone while I would think birds living on or near the forest floor may get affected less. The only hope I can see there is, would be that there must be some forested deep gullies or other relatively sheltered places that may have seen less damage. There won’t be many. Some birds may survive there but this I’m sure would not be enough to see a Hornbill population through the hard times.

Samar is an important stronghold for the critically endangered Philippine Eagle as well. Today, one can only guess its fate on the island, and I would personally think that initially they would have little problem finding food as its prey has been left with little or no shelter making hunting easy for the Eagles. In the long term this must be bad with prey species getting rarer as they themselves must face difficulties finding food in the wrecked forests.

Let us take a peek at some other affected islands. Northern Cebu was an area hit hard but it did not had any forests left to start with so I see little problem for nature. The 2 tiny fragments of original forest left on Cebu, Tabunan and Nug-as were spared from total destruction. This is important for the single island endemic Black Shama and any Cebu Flowerpeckers that may still exist. Iloilo city on Panay was reported to have sustained some major damage. This also means that, if we draw a line, the remaining forests on Mt. Canlaon on Negros may have suffered. This would be a major blow to populations of endemics as Visayan Flowerpecker, White-winged Cuckoo-shrike and Visayan Hornbill. Populations of these species further south near the city of Dumaguete I would think must have been spared from Haiyan’s wrath.
Further afield, on Panay NE of Iloilo city, lies Mt. Madja-as. This mountain range found itself in the path of the typhoon but I’m not sure how hard exactly it was hit. If the forests on these mountains were hit equally hard as were forests I have witnessed on Leyte you may be sure that it would cause the immediate extinction of the already critically endangered Walden's Hornbill of which the region around Madja-as was the last stronghold. If so we can of course barely blame the typhoon although it did deliver the final blow. Populations of Walden's Hornbill would have been very safe for example on southern Negros if only we humans would have left some more forest standing there.

Fragmentation of habitats and populations leaves so many species today extremely vulnerable. It is so hard to accept that a single weather event or forest fire or else may nowadays well wipe out a species totally. Nature used to be resilient. Unfortunately we humans are so busy to fragment or take out full habitats and destroy local ecosystems. Maybe because of us nature today isn’t that resilient any more???

My trip on Leyte wasn’t for pleasure or sightseeing so I haven’t been busy taking pictures. There was concern for our safety so we did not stop the car once, but I managed to take a few snapshots from the moving vehicle; 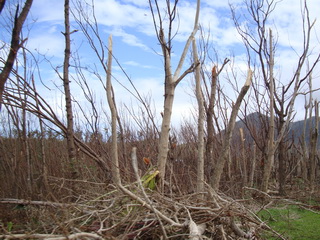 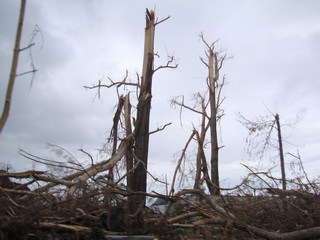 I have not been able to photograph the forest up on the mountains although things that happened were clearly visible. I managed a few snapshots of roadside woodlots that once stood thick and lush green. It is hard to visualize things if you have not been there. Just to know that no sky would have been visible if these photos would have been taken from the same positions before the typhoon struck may help get an idea. 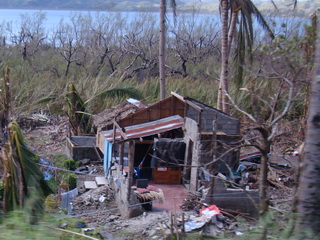 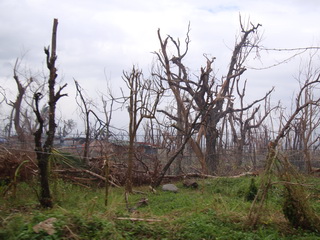 Left; Behind the collapsed house are mangroves. On a normal day this would be all green and it would not be possible to see the water beyond.

Right; Another roadside woodlot... if this is what the natural forest these days looks like on Leyte...

Just a minute earlier we had passed an even bigger tree that had simply toppled over.
This one managed to stand but got completely stripped of its leaves.
Trees left like this wouldn’t provide with much food or shelter for birds in the forest.


Read our report on birding in post-typhoon habitat as we visited the wrecked forest at
Lake Danao near Ormoc on Leyte 8 months after the typhoon event.

After 124 years
the 'Tiger' returns
to Philippines

This morning in Subic Bay